At 893m (2930ft) Cross Fell is the highest mountain in the Pennines. For anyone who explores its broad summit plateau the weather will certainly play a big part in experience
Cross Fell in Winter

I have explored the area on and around Cross Fell on over a dozen occasions and only recall having a view from the summit plateau twice. On the first occasion I mountain biked up to the bothy known as Greg's Hut with 3 friends and then walked up to the summit. We considered ourselves lucky in that we managed to get a few brief glimpses of featureless moorland through fast moving cloud that was being shredded by a bitter northerly easterly wind - and that was in summer.

On the second occasion I was part of a search team looking for an experienced walker who became disorientated and eventually benighted somewhere near the summit plateau. We searched during the night probing the slopes in a howling wind and driving rain before being forced to take shelter ourselves for a couple of hours in Greg's hut. Come the dawn we were back on the plateau being battered by a gale so strong it was impossible to communicate with team members only feet away. The wind was a continual bully roaring in our ears, pushing, pulling and twisting our bodies as it gusted and tore at our clothing and equipment. Then all of a sudden the wind would drop or change direction and still leaning we would be pitched forward or sideways only for it to begin all over again. Hunched up, tripping and staggering like drunkards we continued searching conscious that in these conditions anyone injured would not survive very long. As we searched I became very aware of just how variable the wind was. In the middle of the plateau the wind while still incredibly strong was pretty constant. In contrast the nearer we got to the plateau edges the worse it became. Here the harrying nature and increased velocity became much more extreme as it rose over the scree and boulder fields to the north and east before accelerating across the plateau and down into the Eden valley. Perhaps we were experiencing the birth of the "Helm Wind" a local and very powerful air stream noted for its ferocity and ability to cause localised destruction down in the Eden Valley. However such musing were cut short when we heard on the radio that missing person had been found on slightly lower and more sheltered ground to the north west of the summit. He did bear some scars from his night time adventure though, with a cut to his head and a broken compass as a result of being blown over. Surprisingly despite his night out he was only suffering from mild hypothermia - his slightly lower elevation and more sheltered location clearly made a considerable difference.

What of the view then? Well just before leaving the summit the cloud began to break and we had extensive views east down into upper Teesdale and south across the Eden Valley. However by then we could not have cared less about how good the view was, we were all too cold and tired. To add insult to injury in those few hundred meters to the hut the wind dropped to much more manageable levels and even allowed the helicopter to recover the casualty from the hut itself. I knew though that the "helm wind" - if that was truly what it was - would be still at work up there scouring and shaping the summit just as it has done for thousands of years. Experiencing such conditions really does reinforce the need to respect these mountains even when conditions in the valleys appear benign.

Another opportunity to enjoy a view from the summit came during the winter when a friend of mine offered to be a porter for the day and help carry up some of the camera equipment.

The forecast was ideal with clear overnight skies and a hard valley frost predicted. Leaving the car in Kirkland we could see Cross Fell and its neighbours had a good covering of snow and with the predicted clear skies being correct we had high hopes of some extensive views. I even dared hope that this would be the time I would stand on the 2930ft (893m) summit with views all around and nothing other than the pin drop silence you are sometimes lucky to experience in the British mountains perhaps once in a winter.

Picking our way around frozen puddles and some more extensive ice patches running across the track we made good time up to the band of scree, crag and boulders that mark the edge of the summit plateau. This area can be quite awkward to negotiate when wet and slippery but fortunately most obstacles were buried under fresh snow which made the going relatively easy. Progress however was a little slow as the extensive views called for several photo stops. Capturing pure landscape images that demonstrated just how wild and barren this part of the Pennines can be under snow was quite a challenge though, as the lack of identifiable features made it difficult to convey a sense of scale. This can be solved by placing someone in the frame and provides a better perspective for the viewer, so with Alan acting as model we slowly made our way towards the top. 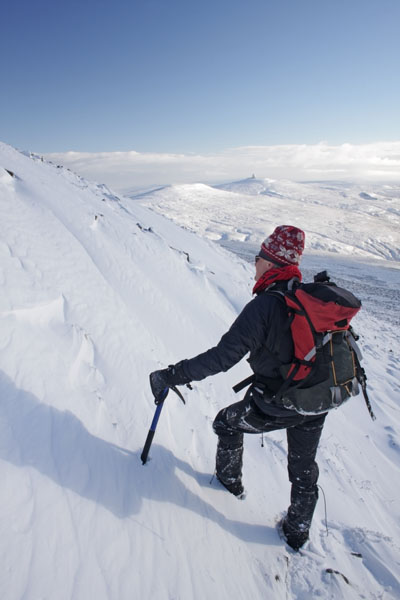 The final snow slope that leads to the edge of the summit plateau. Image Copyright David Forster


On reaching the summit plateau itself my hopes of quietude were completely blown away. Here evidence of the winds work was all around. Spindrift forced on by a bitter northerly wind streamed across the ground. It hissed and wormed its way through wind carved sastrugi which in turn squeaked and crunched as we made our way around the plateau edge to get better views of Great Dun Fell. Only then did it hit me that I had never truly seen a view from Cross Fell. Ahead I could see the golf ball dome of the Civil Aviation Authority radar on Great Dun Fell with Knock Fell and Meldon Hill behind. Further to the east the bulk of Mickle Fell could also be seen, but views to the north were limited by a band of cloud and mist. Below but unseen the infant river Tees flowed into Cowgreen reservoir.

Alan on the summit plateau of Cross Fell with the view towards Great Dun Fell. Image Copyright David Forster

Making our way over to the Summit trig point the mountains of the Lake district came back into view, but views into the Eden valley were obstructed by the plateau rim. Frustratingly the strength of the wind put paid to any good quality summit images using a tripod. It whistled through the tripod legs and rattled the camera to such an extent that low ISO and therefore slow shutter speed images with a decent depth of field ended up completely blurred. Handholding produced a hand full of record shots, but that was all and none met the quality I needed to get them published. Instead with numb fingers and the threat of getting seriously chilled we retreated to the low walls of the summit shelter. After hot drinks and a bite to eat we then made our way north towards Greg's Hut to pick up the path that would take us back to Kirkland. All in all it was a successful trip and I came away with some decent images, some of which were later published in various magazines.

What of the mountain experience - well cold and windy it seems will always be my abiding memory of Cross Fell. Perhaps next time I will visit at night to capture a star lit sky and then with luck capture the sunrise above mist filled valleys. Who knows I may even enjoy that level of quietude that only those who walk above the clouds can ever experience.

All Text/Images Copyright David Forster unless stated otherwise.
Next
Previous