Staithes really does fit into the classic image of a quaint fishing village. Pretty, steeped in history and something that is becoming increasingly under threat, is still actually involved in fishing, albeit in a small way with only one full time boat as well as a few part-time ones. Today in the sunshine the village was bustling with visitors of all ages. Some were sitting enjoying the view or wandering around the harbour, others were looking at the quaint houses, or simply sitting chatting in the warmth of the autumn sun. Some brave kids were even swimming in the sea. 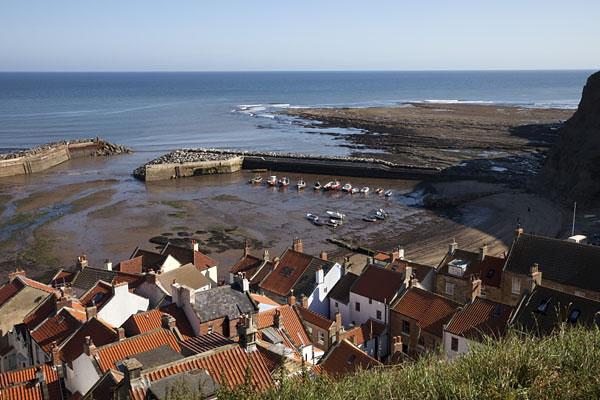 
Being on the Cleveland way footpath the village also quite popular with walkers as well and there were plenty folk with rucksacs wandering around, or puffing their way up the steep hill leading out of town towards Runswick Bay.

Our plan was to walk over to Runswick bay and back but we started off by having a gentle wander around town and to have a look at what photo opportunities there might be for later on in the evening. As soon as I stood on the bridge over Staithes beck I knew I had found the first. 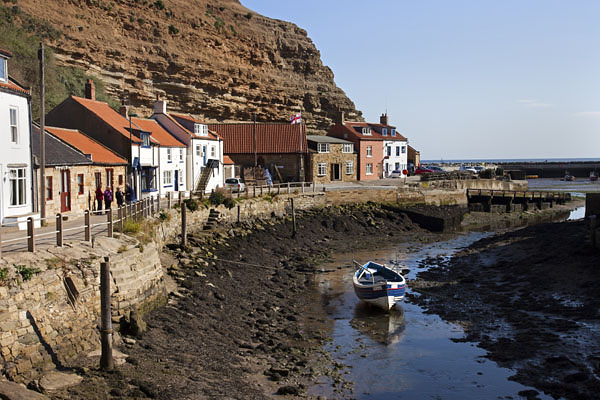 
A wander over to the rocks below Cow Bar Nab and I spotted this large anchor chain. The light was getting a bit too harsh but it did help with the detail. I decided not to correct the barrel distortion created by the wide-angle lens as I felt it added to the overall effect of space.


We then headed off for our walk over to Runswick Bay but by now the light was really too harsh for anything particularly creative so I stuck to record shots.

Returning from Runswick Bay later in the day we had a pint at the pub while waiting for sun drop to give us some more dramatic lighting. We then headed back to the bridge but noted that the light was still quite harsh. Unfortunately waiting for more diffused light was not an option as the hill behind would soon begin to cast its shadow over the scene and it was a case of trying to get the best from what light is available. 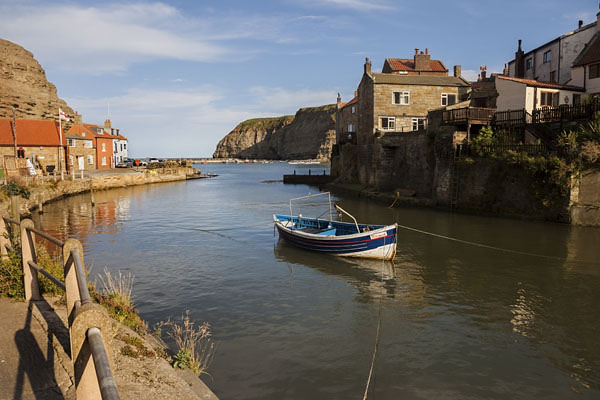 
All in all I was fairly happy with the images but I think on a return visit I will have a look at producing some images from higher up the hill and will try for some night shots of the harbour itself.

All images and text copyright David Forster
Next
Previous