We regularly get visits from a male and female Sparrowhawk to our garden. Hedge hopping their way across the fields they arrive on silent wings, cause a few seconds chaos as the birds scatter from the feeders and then leave as silently as they came. Very often the only visual sign of their passing are a few feathers from one of the unfortunate victims.

I have to admit that despite my interest in wildlife I came to dislike the pair of Sparrowhawks that came into my garden and began I felt, to decimate the bird population. From the feathers left behind I knew they had taken a few Blue and Great Tits and thought - well its nature. Then over a number of weeks our Sparrow population was reduced somewhat. Knowing how much the House Sparrow is struggling my attitude changed to more of concern. The final straw came when they took one of the pair of woodpeckers that visited the feeders. Those bloody hawks are going to wipe out all my birds was all I could think.

For some reason I found it difficult to accept the fact that these birds were treating my garden as a takeaway. When I really thought about it though and rationalised my feelings I was concerned more because they were taking my birds, birds I had come to know, birds that trusted me and would happily feed only a few feet away as I moved around the garden. It took a little while to realise that actually it was me who was at fault. After all by feeding the birds I had created a Sparrowhawk takeaway, they were just doing what was necessary to survive and bring up the next generation, nothing more, nothing less. It wasn't for fun, or for profit - it was simply for survival. It was me who had tipped the natural balance by encouraging all their prey into a small area and they were simply taking advantage of the situation. 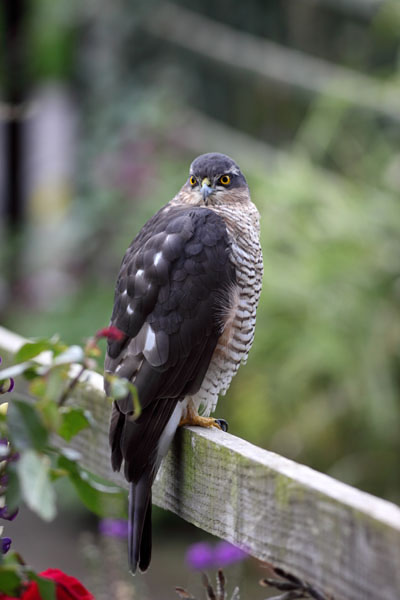 Male Sparrowhawk on the Woodpecker feeding post (notice the colouration and size difference between the male and female. The male is significantly smaller and has a slate grey colouration). Image Copyright David Forster


There is another side to this predator story though and that is your cute favourite little birds are also affecting the natural balance in the garden. A few weeks ago I noticed that dozens of Bumble Bees were dying on our path. At first I thought that they had been affected by some sort of poison, but on closer inspection noticed that they all had their insides missing. It was a real "who done it" and I was initially at a loss as to what was going on. The mystery was solved a week or so later when I disturbed a Great Tit and subsequently a Sparrow who both appeared to be taking the Bees. A quick check on the web and I found out that it is quite common for Great Tits in particular to predate Bumble Bees in this manner. The fact that Sparrowhawks take these birds helps to keep this natural balance as well, a balance that very often we see little evidence of first hand and therefore do not always fully understand. Like it or not even the cute and timid are predators just like any bird of prey, we simply see little evidence in our normal daily lives.

So how do you enjoy the birds you feed in the garden, yet also allow birds of prey a living as well? The first thing is to accept that birds of prey are just as vital to the diversity of the garden habitat as your favourite garden birds and they will not wipe out every one. I have to admit it has taken me a little while to accept this, however from my own observations it does appear that in reality they make little impact on our garden birds in the long term. In fact this year has been our best year for our Spuggies and we have a healthy population of around forty or so. No doubt the winter will reduce the numbers somewhat but they are certainly up on previous years despite regular visits from the Sparrowhawks.

At a practical level you can do several things to give your favourite birds a sporting chance. For example by placing feeders near natural cover such as trees, thick bushes or hedges the birds will have somewhere to escape to. Don't be surprised to see a Sparrowhawk fly at full tilt into a tree or bush if it has managed to get within striking distance, their skill and agility in such a confined space is incredible.

You can also grow plants or add natural obstacles that do not allow birds of prey an easy line of attack. That said the last thing you want to do is place anything in the way that puts any of the birds at risk. Netting for example should certainly not be used. Personally I think a well planted garden is best, but if you cannot add any natural cover the RSPB has some tips on manmade deterrents that you may find useful.

Finally whatever you do and regardless of its success enjoy the fact that your garden must be a prime habitat in order to attract one of our top garden predators.