It has to be said when it comes to the outdoors, I am an outdoors person first and photographer second. I came to photography via my love of nature and mountains and not the other way around. This approach is often reflected in my choice of outdoor equipment when I am in the hills photographing. In winter when it comes to dealing with ice and snow I have always carried my mountaineering axe and my Grivel 12 point crampons. This kit is perfect on a steep mountain, or when I plan to climb an easy gully or ridge on my own, but if I am simply on walking terrain they are a bit of overkill. The 12 point crampons are also fairly heavy as well and considering I am carrying a load of camera gear on top of my outdoor kit, the rucsack eventually begins to feel a bit of a burden. With that in mind I have to be pretty weight conscious with regards to what should be carried. A further consideration is that I end up having to wear my full mountaineering boots as the Grivel's are not suitable for bendy boots. 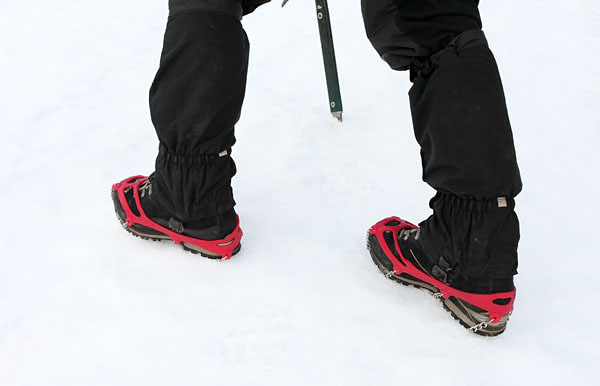 
Last winter I decided to get a set of Kahtoola Microspikes® for the days when I was simply out and about in the hills but did not expect to come across too much in the way or steep ice or snow. This meant I could carry a bit less, still enjoy the comfort of wearing my 3 season walking boots and of course still be able to deal with any patches ice or hard snow I may encounter.

I looked at several makes but the Kahtoola's seemed to offer the most aggressive grip in varied snow and ice "walking" conditions. I highlight walking because they are not designed for the sort of mountain terrain where you will experience really steep ground where you need to front point. That said I suppose if you came across the odd really steep bit you could certainly cut steps. I have experimented with them going up and down on pretty steep ground and you eventually get to the stage where the rubber banding that goes around the boot begins to stretch. In this situation your boot tries to slide off the base and places a lot of strain on the rubber. That said this was simply an experiment to find out what the limitations were and is not really a criticism. Price wise at £45.00 they do seem a bit expensive, especially as you do not even get a bag to store them in.

So what are they like in practice? Well initially I was a bit concerned when I took them out of the box and they fell apart. On inspection I noticed that one of the rings that hold the chains on had not been fully crimped. This was easily resolved and all I needed to do was reattach the chain and crimp the ring fully. On inspection the rest of the attachment rings were ok so assume it was one that was overlooked. It did however cause me some concern at the level of quality control.

Fitting
Attaching them to your boots could not be easier and all you have to do is step the front of your boot into them (they are marked front) and then stretch the rubber backwards over your heel. A quick adjustment to make sure they are aligned correctly and away you go.

Grip
Obviously they are not as aggressive as a mountaineering style of crampon with front points and therefore will not provide as much security on steep ground. One aspect I do like is the balance of the points across the foot. They have a 10 point design with 8 of the points spread out over the front part of the foot and only 2 points on the heel. Considering it is the front part of the foot that does the work when going steeply up hill it is common sense really. Going downhill also feels pretty secure although you need to ensure you place the foot fairly flat onto the ground as opposed to stepping down on your heel - again common sense.

Balling
Balling is where soft snow builds up on the sole of the boot and between the points of crampons. This can lead to a situation where the actual points do not contact the snow and you loose grip and can end up slipping or falling over. A quick tap of the ice axe shaft on the side of the boot soon clears this, but when you are tired or loose concentration it can be very dangerous; especially so if you fall on hard or steep snow/ice, or near a large drop. It has to be said that they performed quite well in this respect. The short points and none pie cutter design being of significant advantage here. One thing I did notice however was that when balling did take place the weight of snow sticking to the crampon points tries to drag the microspikes from the boot. This loads the rubber banding directly, which over time could tear the rubber where the chain ring fits. On other occasions where the snow was changeable I also noticed that when walking I could feel the chains slapping against the sole of my boot (under normal conditions no slap occurs). This "slap" occurs when the points stick into the snow and as you step forward the rubber stretches. When the points break free from the snow they then slap against the sole. This again must place a lot of strain on the rubber banding, however despite this I have not noticed any damage or wear.

Maintenance
On mixed terrain point wear is not too bad and while a little more fiddly to sharpen than standard crampons they are pretty straightforward. The important thing to remember here is that just like all crampons you must not over sharpen the points as they will become blunt much quicker. As far as preparation for emergency repairs on the hill I simply carry the same few cable ties I normally carry with my mountaineering crampons.

In has to be said that in the UK the snow is very variable and you can experience a wide range of snow conditions, even over a few hundred metres. For example yesterday I experienced everything from knee deep soft snow, hard neve, ice, wind slab, sastrugi and more, so they stayed on all day. I have to say that most of the time I hardly notice I have them on they are so light. Another plus point is that the points are set inboard from the edge of the boot and snagging on gaiters or trousers does not appear to be much of an issue. In other words I could walk normally without the "crampon gait".

All in all the I feel these are a decent piece of kit, yes they do have their limitations and I do have some concerns at the durability of the rubber banding. That said they have survived ok so far and only time will tell. These concerns are outweighed by the fact they are light, compact, easy to fit, comfortable and can be worn on anything from trainers to boots.
My Rating - 4 out of 5
Next
Previous