As a mountain Fleetwith Pike is not quite what it seems. In many ways it is a real mountain of contrasts. When viewed from Honister pass, or from a walk upon its southern or eastern slopes, it is a mountain ravaged by the heavy industry of mining and quarrying. Yet despite the ravages of industry it is also a mountain of beauty and provides some wonderfully panoramic views of its neighbours - Kirk Fell, Great Gable, Haystacks and Pillar. All of which can be taken in with a single sweep of the eye. On the northern side where cliffs plunge down hundreds of feet to the grey screes above the Honister pass road the views are limited by its loftier neighbour Dale Head. You do however get some good views of the old mines and inclines at Yew Crag, all of which are slowly being reclaimed by nature.

Beyond the wonderful panoramas, the greatest contrast comes from within the mountain itself. Here in the darkness in the heart of the mountain men and machine still toil by tearing down great slabs of grey-green slate and then hauling them out into the daylight to be processed into roofing slate, walling stone, and much more. A number of years ago when the mine was closed and few people thought it would ever reopen I was fortunate to spend some time exploring and photographing the workings. I have added a couple rather poor scans from some pretty ropey old negatives just to give you an idea of how the workings looked in those days. 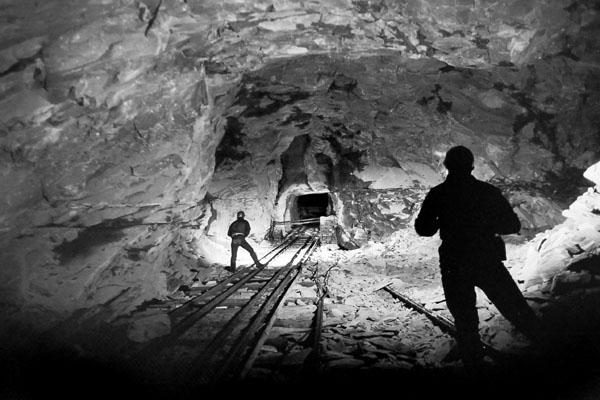 Incline where the slate was lowered through the mine. © David Forster 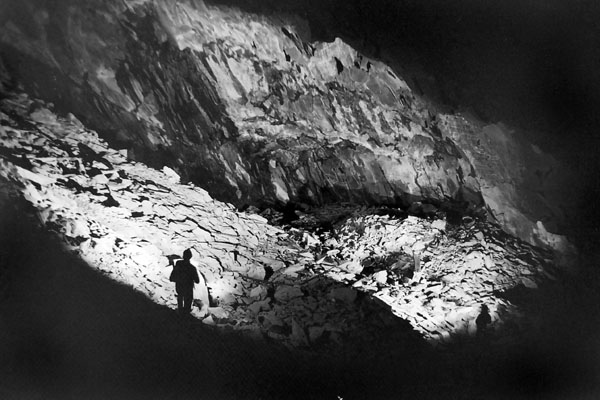 The large Cathedral like chamber in the main workings. There are three cavers in the chamber can you spot them all? © David Forster


For me though it is the summit at the western end where the ground falls steeply away that gives the best viewpoint. From the cairn the view west down the length of the Buttermere valley and to the coast beyond is wonderful. It was here hidden among the folds of rock and grassy ledges we planned to have a quiet wild camp, watch the sunset, enjoy the sunrise and generally chill out - and of course capture a few images.

It took us a little longer to reach the summit than we had planned because every now and again we were forced to stop, not I might add to rest tired legs, but to simply admire the view and soak up the atmosphere. Eventually in the un-seasonal heat and accompanied by the sound of Skylarks we reached the summit. We were not alone in seeking this lofty viewpoint and there was already a family enjoying a break in the evening sunshine. After spending a while taking in the view and exploring the summit area a little we searched for a quiet secluded spot to put up the tent and get a brew on. Later as the sun began to set we poured ourselves a cup of coffee and as the stove ticked itself cool we listened to the breeze whispering across the hillside, creeping through the rocks and then with a final sigh, slipping gently over the summit to the valley below. With the world beyond completely forgotten it was a moment of true freedom and relaxation. Unfortunately and despite our earlier optimism the sunset never did produce the colour and atmosphere I had anticipated, so instead of photography we simply sat and immersed ourselves in the view. Photography wise all was not lost though and once the sun had dropped below the hills, a damp mist began to creep in from the coast giving the valley a monochromatic almost Tolkeinesque atmosphere. Finally, unexpectedly, the images came. 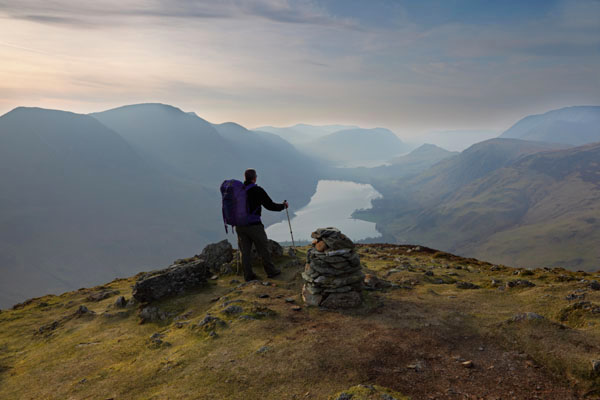 The view west along the Buttermere Valley towards the coast. © David Forster


Later as darkness descended so did the cold and we donned an extra layer, determined to make the most of the night before retiring to the tent. As we watched the darkness creep up the mountainsides and as Jupiter and Venus appeared above, we noticed the lights of someone making their way off the fell. As always when I see such lights in the mountains I hoped they had planned their night time adventure, rather than having it forced upon them at the end of a trying day. The lights appeared and disappeared intermittently as they slowly progressed down the mountain and as the cold drove us into our sleeping bags I silently wished them a safe passage. 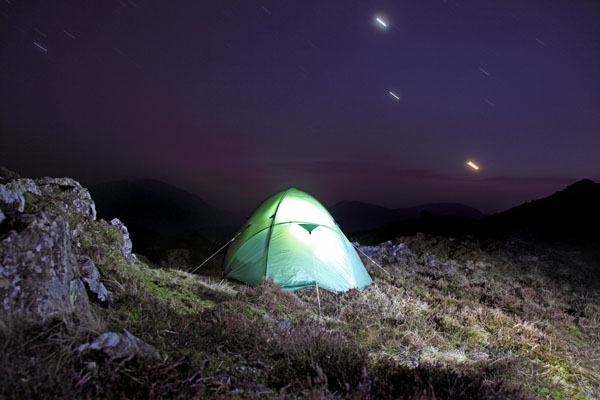 Jupiter Venus and the Moon tracking across the night sky. © David Forster


In the morning the sun was unable to penetrate the mist and low cloud to the east and we were denied a colourful sunrise. Even so as we took down the tent and watched the flattened grass slowly spring back over a cup of coffee, it was impossible to feel any sense of disappointed in such wonderful surroundings. 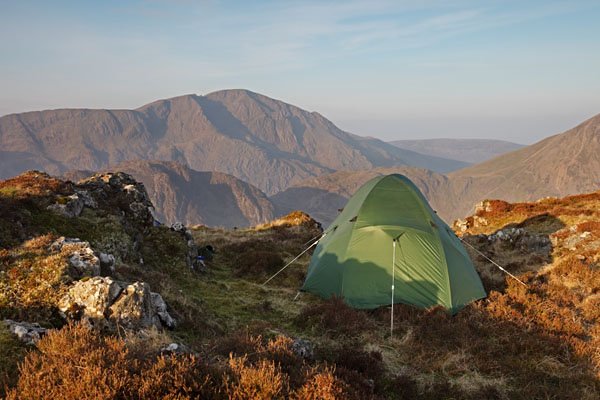 
When the sun eventually broke through it was too high to colour the clouds, but still provided some wonderful light to chase away the morning chill. While Moira got the stove going for another drink and then sat on a rock reading in the sun, I wandered the short distance to the summit for some more photography. Below to the west Buttermere appeared mirror calm, the blue of the sky reflected deeply in its chill waters. 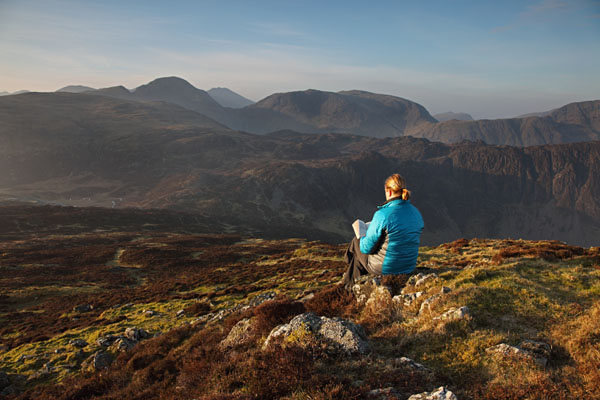 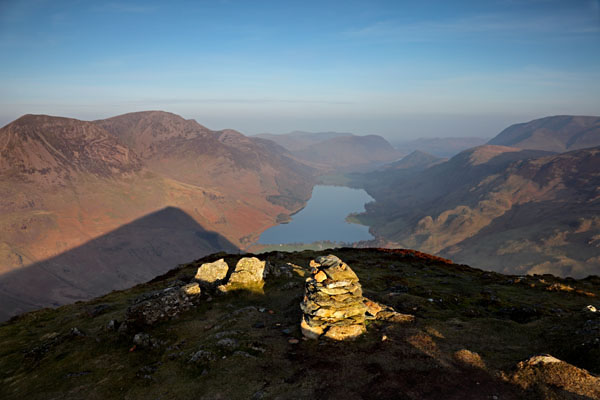 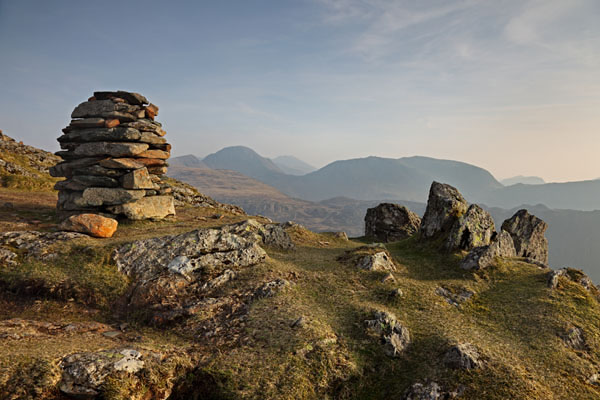 
So often when we stand on a mountain summit we are accompanied by the roar of the wind, but this morning it was completely calm. In fact so calm I could hear the purr of our stove 20 meters away. An hour later with photography completed we simply stood there staring, absorbing the feel of the landscape and listening to the sounds of the mountains, before finally and reluctantly, turning around and making our way back to the pass.


Below is a Short Video of the Trip