It has to be said that sunshine has been hard to come by of late and half an hour after capturing this image I was forced to don my waterproofs yet again when a really heavy rain shower managed to sneak up on me while I was filming. One minute I was wearing a T shirt and the next I am soaked to the skin in the time it takes to stash the camera kit in a drybag and open the rucksac to get my waterproofs out - some summer this has turned out to be. There is lots of wildlife about though.

I spotted this Common Lizard Lacerta (Zootoca) vivipara basking on a Bilberry covered fence post in Upper Teesdale yesterday. One of the survival strategies for this species is to shed their tail when attacked by a predator. This one looks as if it has survived such an encounter and appears to be growing a new one. Frustratingly I only had landscape kit with me and was disappointed not to be able to get up close with a macro lens. 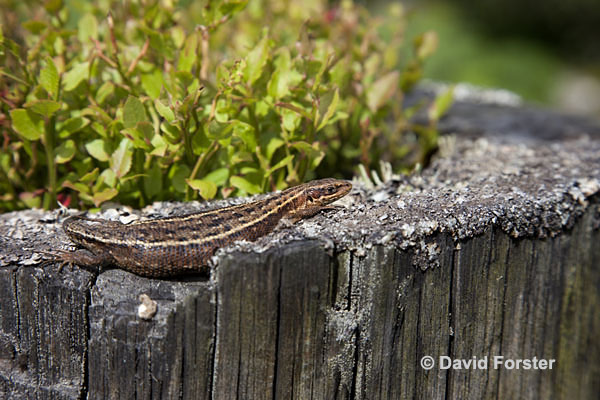 I think? it's a female and if so will soon be ready to produce young. Interestingly in warmer climates they do lay eggs, but in the cooler northern climate rather than produce eggs these lizards actually incubate the eggs internally and then give birth to live young.

· Lizards are cold-blooded and hibernate, or perhaps more accurately "Brumate" during the colder months.

· They feed on invertebrates such as woodlice, spiders, insects, worms and slugs.