I had a quick trip up to the summit of Cronkley Fell last week to catch a sunrise for the "Valley of the Ice Flowers" project.

It has to be said that I always feel a bit uneasy walking across the fields from the Hanging Shaw parking area in the early morning darkness. The path passes close to a couple of farms and despite how carefully I open the gate that lets you access the field leading to Cronkley bridge, I always seem to set the dogs barking. This morning it has to be said was no different, but as I dropped down to the river the pre-dawn darkness silence returned.

With cheeks burning from the frosty air and the exertion of trying to push on past the farm as quickly as possible I stopped briefly to take in the scene. Downstream to the southeast the sky was beginning to lighten producing a silver glow that added to the already icy atmosphere of the valley. Ahead the river itself trapped in the shadow of the fells took on a metallic sheen as it slid like mercury under the bridge. Upstream and despite the brightening sky a pearl coloured moon sat above the shadowy cliffs of Cronkley Fell. Despite wanting to enjoy the situation and perhaps stop for a while I was late and had no choice but to push on as quickly as possible. This haste was the price I had to pay for the extra five minutes in a warm bed - five short minutes that unfortunately turned into half an hour.

Once beyond the second farm and onto the moor properly I relaxed and began to really enjoy the exertion as I raced the rising sun up the Green Trod footpath. Not surprisingly the sun easily beat me and I stopped a couple of hundred metres short of the summit to catch the first rays as they crept over the hills. 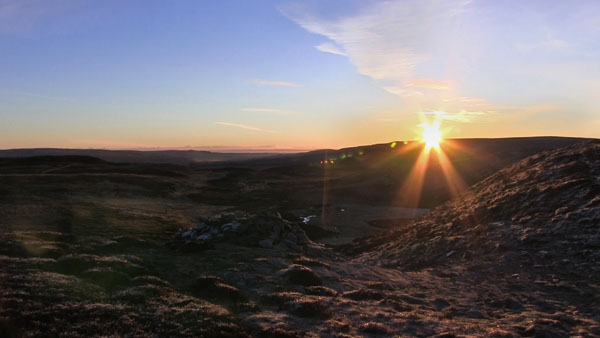 Still from the Video

Sunrises are hauntingly beautiful, yet despite the years of trying I have never ever managed to capture an image that I feel can portray just how spiritually uplifting it is to simply gaze upon the first rays of a new day. To observe the change in the landscape as the light washes over it, to actually feel the release of tension in the air as it does so - and as I did this morning, listen to the sound of grouse noisily celebrating a new day. Such a spectacle is beyond any form of words, or indeed pictures I could ever create.

Once I had completed the video sequences I wanted it was time to head off towards the summit area where I spent the next hour or so focussing on still images around the trig point and nearby tarn.

The air clarity was incredible and across to the west Cross Fell and the Dun Fells stood out clearly with their skullcaps of new snow, contrasting sharply with the autumnal glow of the lower fells. Beyond the tarn and covered by a dusting of snow stood the low bulk of Mickle Fell on whose slopes I could just pick out the old mine buildings of the Silver Band Mine - now used as a shooting hut.

Across these fells there are many human stories that can be observed in a single sweep of the eye, or hidden within the folds of the land. Everything from the tragedy of lost aircraft high up on Cross Fell, Mickle Fell and Knock Fell, to the destruction wrought by humans in the form of mining and infrastructure projects such as the Cow Green reservoir. There is also hope in the form of the Moorhouse National Nature Reserve which covers much of this landscape, and will I hope protect the area from the relentless march of wind turbines and the sticky fingers of big corporations such as those who currently want to exploit some parts of the dales for mining and shale gas extraction, aka "Fracking" (Teesdale Mercury 05/12/12). Fracking incidentally is the highly controversial process that has been causing minor earthquakes around Blackpool and carries some very serious pollution fears.

Despite the hand of man it is as wild a place as any in England, yet it is certainly not a landscape locked solely in the past that does little for the economy as some would wish to portray. On the contrary, this is still a working landscape providing work for many people, either directly or indirectly, in areas such as grouse shooting, quarrying, conservation, farming, forestry and increasingly, tourism in all its forms. The latter is something that few truly realised the full value of until the foot and mouth epidemic closed the countryside and many businesses struggled, or even went under.

It is a wonderful landscape and one worth fighting the greedy corporations for.
Next
Previous