There seem to be plenty of Pheasants around at the moment. I counted 7 around the feeders at Low Barns Nature Reserve the other day. There were a couple of males but they were very wary of each other which is probably a good indication they will be breeding soon. I also saw one with a damaged foot which could well be as a result of a fight. Seeing these common birds got me thinking about their background and life cycle.

The Pheasant is a common none-native Game Bird that was probably introduced into the UK as long as 2,000 years ago by the Romans. Food remains found at Silchester certainly show the Romans ate these birds and it is not unreasonable therefore to draw the conclusion that they would have bred here. That said a number of sources suggest they were actually introduced by the Norman's in the 10-11th century. The earliest documentary evidence is certainly from that time where it is said that King Harold in 1059 offered the canons of Waltham Abbey a brace of pheasants. (Ritchie J. 1920, The Influence of Man on Animal Life in Scotland, Cambridge University Press).

Pheasant colouring can be very variable as there are a number of different races. For example, Phasianus torquatus which has a white band around the neck and the much less common Green Pheasant P. versicolor.


Some evidence of the white neck band can be seen which relates to Phasianus torquatus. In a pure bred bird this band is several cm wide and goes completly around the neck 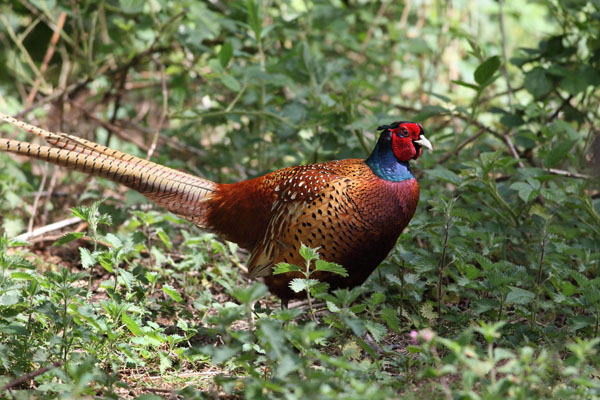 This male does not have any white at all


Another mutant variation has a very dark plumage and is known as Phasianus colchicus, var. tenebrosus. These birds are often refered to as being "Melanistic" but technically they aren't. 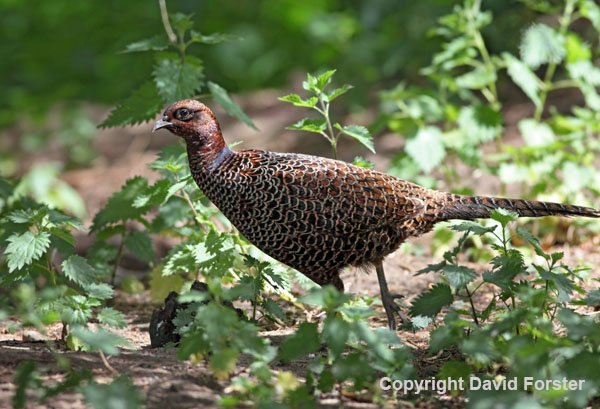 Female bird with characteristics of Phasianus colchicus, var. tenebrosus sometimes incorrectly referred to as being Melanistic


Interbreeding between races unfortunately makes it impossible to tell if a particular bird simply has similar plumage characteristics as opposed to being an actual true form. So much so it is thought there are in fact no pure bred pheasants of any particular race in the wild in Britain

Pheasants like many other none-native species have become very successful throughout the UK. There are a number of reasons for this, not least the fact that the British countryside with its patchwork of fields, woodland and heathland is the perfect habitat.

Add to this the fact pheasants are prolific egg layers with some nests having well over a dozen eggs in them (last year I counted 19 eggs in one nest) and it is hardly surprising. A key factor however is that in some areas pheasants are an integral part of the rural economy and are bred specifically for release prior to the pheasant-shooting season, which lasts from October through to February. In these areas bird densities can be very high adding millions to the overall UK population 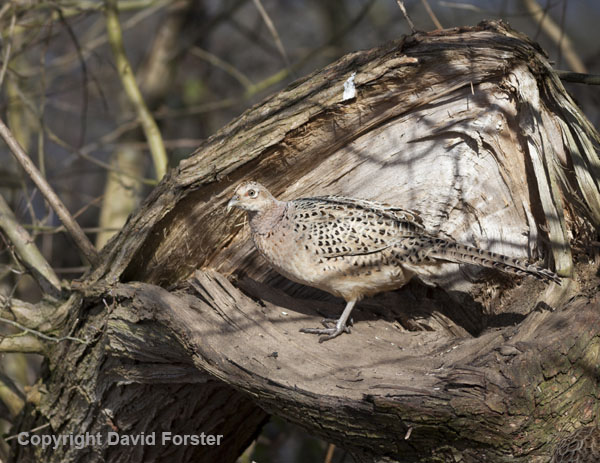 
Unfortunately their success as a none-native species does have some drawbacks for the native wildlife and there are concerns that reptile populations are declining in some areas where pheasants can be found in artificially high numbers.

Shooting interests aside pheasants do not necessarily have an easy life and predators such as Fox, Badger, Mink and Stoat all regularly take eggs, chicks and adult birds. Birds such as Crow, Magpie and Buzzard among others also prey on the pheasant during each stage of its life cycle. This of course brings them into conflict with shooting interests. Road deaths it has to be said also reduce numbers considerably.

The latter will be of no surprise to anyone who drives on country roads and has met an indecisive pheasant waiting quietly at the roadside. Males in particular seem to stand there partially hidden in the grass and just as you reach them something in their pea sized brain clicks and with head held high he will dash straight out in front of you. Then, just as he reaches the middle of the road he will often change his mind and run back. If you were observant and managed to slow down you will then be entertained by the silly bugger running back and forth until he is either hit by a car coming the other way, or with considerable luck makes it back to where he started. If the road is busy you may well be treated to a repeat in your rear view mirror as he does exactly the same to the next car.

If they manage to survive the roads they are easiest to observe in the spring when the males are at their most colourful. Very often you will hear their hacking, "Cukk Cukk" call accompanied by a strange Brrr-rrrring sound made by their feathers as they do a kind of "look at me" display by flapping their wings and fluffing out their chest and tail feathers. 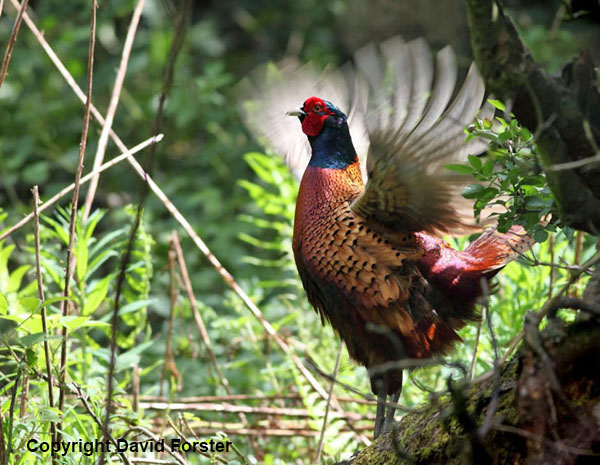 
If a male ventures into another males territory they will both put up a pretty vicious fight and have even been known to have a go at humans too.

Once all of the chicks hatch from a brood they leave the nest and unlike many other birds that are fed at the nest by their parents they are capable of feeding on their own. .

Come the autumn the birds will be in their greatest numbers, but shooting, predation and harsh weather all take their toll on the population and around 50% of the young birds will die during the first year.

So there you have it a little bit about a common bird that is colourful, vocal, full of character and when it comes to roads a little stupid.

As ever I am keen to produce articles that are accurate and if you have any useful information, or indeed corrections it would be great to hear from you.