Walk through any woodland in the middle of the day and you will hear birds singing, insects buzzing and perhaps if lucky you may even see the odd deer. It has to be said that we probably only spot a tiny fraction of the wildlife that is around. This is usually because we make far too much noise, visit at the wrong time, or simply look without seeing - a case of not seeing the wood for the trees I suppose. On some occasions when stepping into a wood I even get the feeling I have just missed something special - a wild party perhaps. Looking closely I may see the fragmented shells of acorns, some scuffed ground with scattered feathers, perhaps a shadowy movement in the distance, even a scuffle in the undergrowth, but one thing for sure the party seems to be over now the human has arrived.

Being the average noisy human, tracking and recognising animal signs has become a valuable skill alongside my photography that I have had to develop. As a result I have spent a lot of time searching for animal tracks and signs and it never ceases to amaze me just how much unseen animal activity takes place each day/night.

For example a couple of weeks ago while wandering alongside a stream in a wood I have permission to visit near Barnard Castle I spotted signs that a frog had been predated. 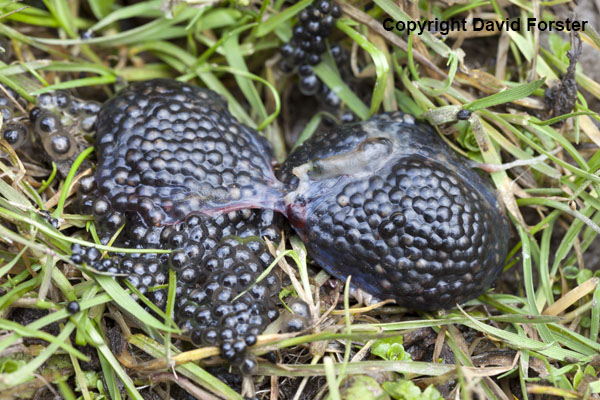 
A little further upstream I also noticed a partial paw print on the stream margin but unfortunately the track was pretty degraded having been partly eroded by the stream. Looking closely at the track I thought it looked a bit like otter, but beyond that it could have been anything really. A search further along the shallow stream margin did not produce anything else and I had doubts that considering the size of the stream (you could step over it in one good stride in some places) an otter would be unlikely to stray up here a long way from the river Tees and its larger tributaries. On the other hand I have heard anecdotal evidence of otter sightings miles from rivers, and believe it or not, even a sighting of one on the slopes of Mickle Fell by someone from Natural England.

Doubts aside I decided to keep an open mind and made a couple more visits but found little other than more frog remains. Then at the beginning of last week I spotted some spraint on the bank side. 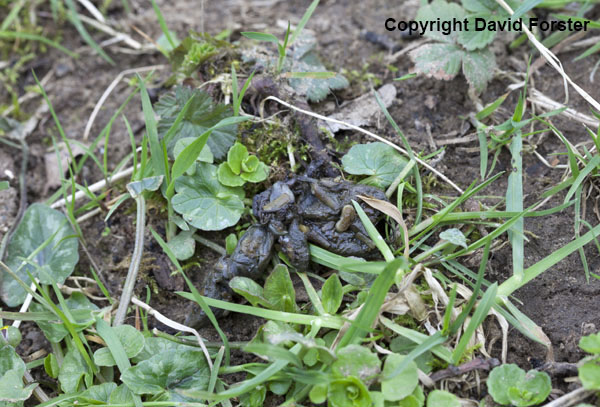 Still unconvinced I gave it a sniff. It is probably worth mentioning at this point that folk obsessed by otters regularly sniff any spraint that contains lots of fish bones. If it is from another carnivore such as mink you will get that unmistakable pungent smell of carnivore. On the other hand if it is otter spraint you will notice a slight fishy smell that surprisingly is not at all unpleasant. Some people describe it as the smell of Jasmine Tea but to be honest I have never got that. There was it has to be said something fishy going on and a quick look around confirmed it beyond all doubt when I spotted the unmistakable paw prints of an otter only a few feet away. 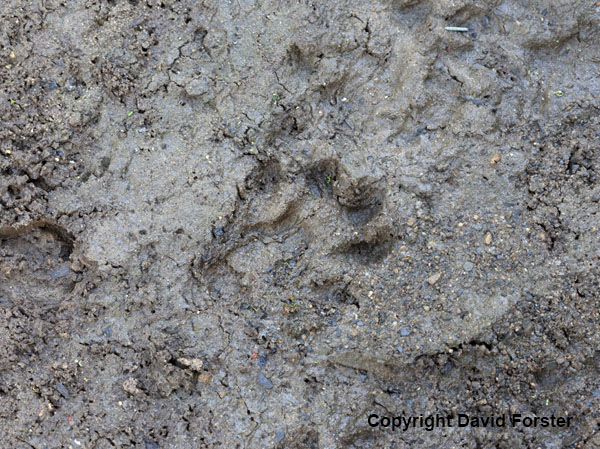 These were only hours old and so fresh I decided to make a plaster cast of the print. 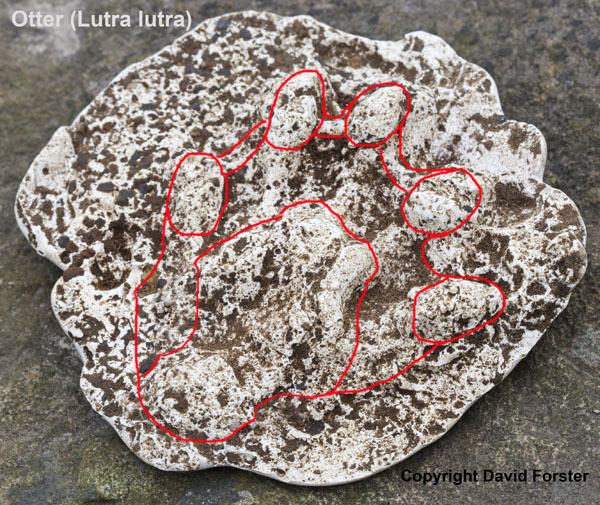 A cast of the print

Its hard to see on a pic of this size so I have roughly outlined the key features of the print which has five toes as opposed to four in a domestic dog or fox.

This is also a fairly big print at 9cm long and just under 8cm at the widest point. In fact the size makes me wonder whether this is actually an adult male. If so it is unlikely to hang around for long. Interestingly while it wasn't possible to see the imprint of the webbing between the toes in the mud itself, the cast actually shows it very clearly.

Returning home I sent the images to Durham Wildlife Trust and they soon confirmed the prints were otter tracks. So there you have it, evidence of a wild Otter close to where I live and in a stream that has previously not recorded any activity - wonderful.