The first job this morning was to get a brew on and then as we had a river crossing to start the day, repair Moira's river crossing sandals which despite, or perhaps more accurately, because they had provided years of service, had fallen apart at the first river. I had gaffa taped them up but a more permanent repair was needed. Necessity is the mother of invention and with a hot tent peg and some spare laces I soon had a more permanent repair.

Refreshed after a good nights sleep, but conscious of the fact we had another long day ahead we set of early and soon reached the col at the head of the valley where the Strutor hut lay. 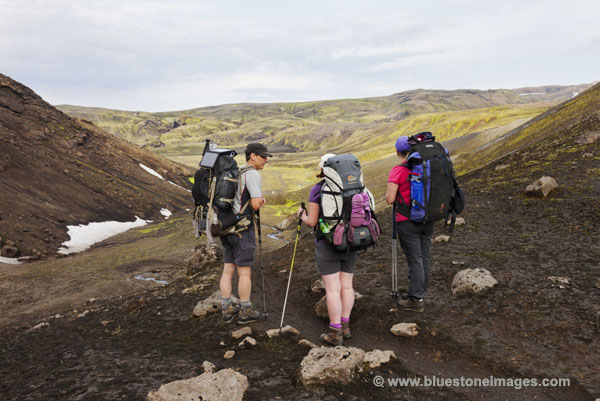 The col below the mountain of Stutor. The hut is at the end of this valley


Half an hour later we reached the hut which was a hive of activity with organised groups, mountain bikers and off road drivers all getting ready for a day in the mountains. This included one complete idiot who stood pissing in the stream despite the fact there was a proper toilet located just yards away. 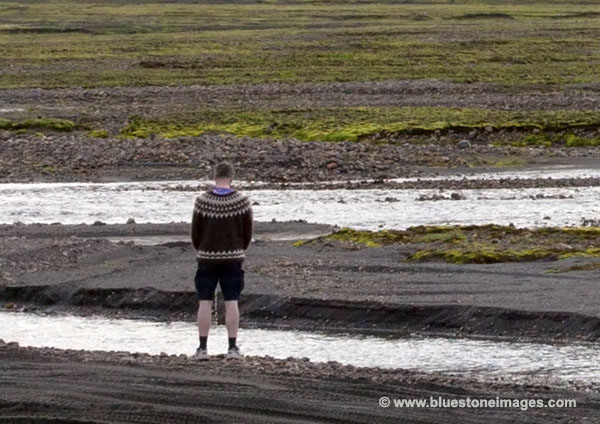 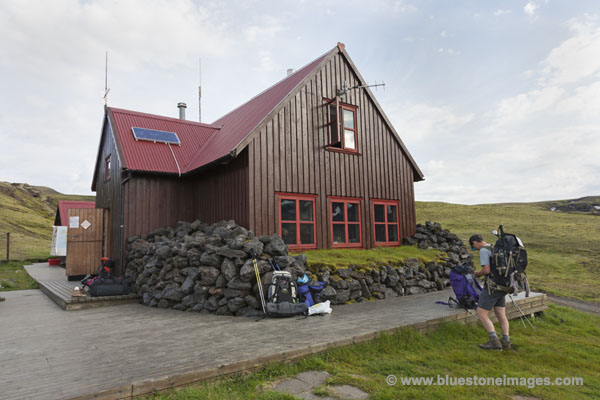 
The hut warden turned out to be a very sociable chap and with coffee in hand was wandering around chatting to everyone. We ended up having a good old natter with him about our planned route and he very helpfully gave us some info that would keep us on the northern edge of the Myrdalssandur desert rather than the route we had planned across the centre. This would give us a 22 km day with some more ups and downs, but it did knock off some 6km and a lot of 4x4 track walking. We had a bit of trouble understanding his directions, but eventually worked out that basically we needed to keep the mountains on our right and pass through two low cols. If the weather and visibility deteriorated we should drop back onto the plain. This interpretation it turned out was spot on, his estimated time of 6.5 hours however was way out - even allowing for lots of stops to stand and stare at the views, or to try and capture it in pixel form. 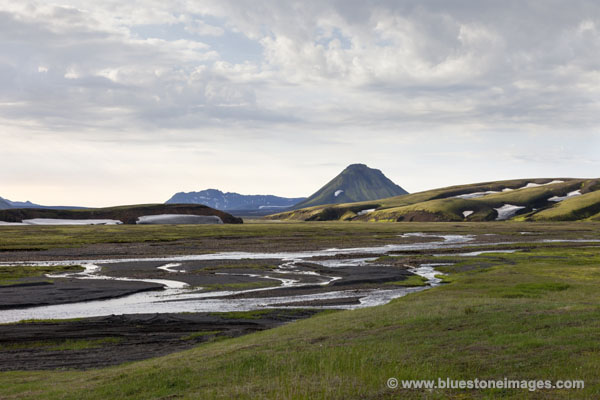 The view south from the hut

We made our payment for using the facilities and were soon heading east across the grain of the land towards Hrutagill, a wide valley black with volcanic ash and criss-crossed with several small streams. These streams drained an area called Strutsoldur and Svartaklof on the map. Despite the violent volcanic past, nature was busy healing the scars and in places small colonies of dwarf willow and various plants such as saxifrage grew. There was no real path here and as the wind blew and the sun beat down it felt really wild and exposed - in fact exactly what we had come for. 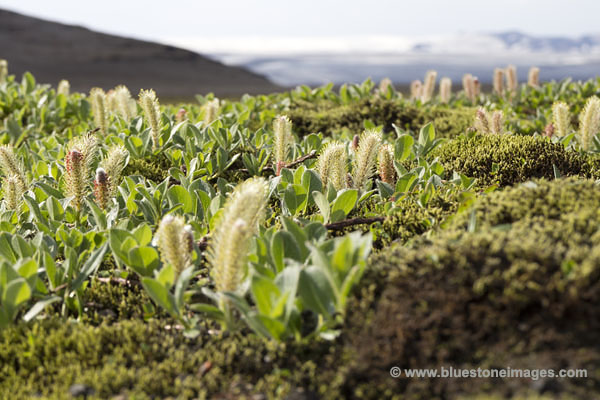 Fortunately at the moment we were walking on the edge of the ash plain where the snowfields drained so the ash was damp, but looking out over the black Myrdalssandur desert we could see dust storms streaming east. We have experienced these before and knew we would end up walking through them later on. It wasn't a pleasant prospect.

Leaving Hrutagill behind we found some footprints and a vague track that led us across a mossy area and onto a gentle moss and grass covered hill with good views of the Myrdasjokull glacier under which the mighty Katla volcano simmers. 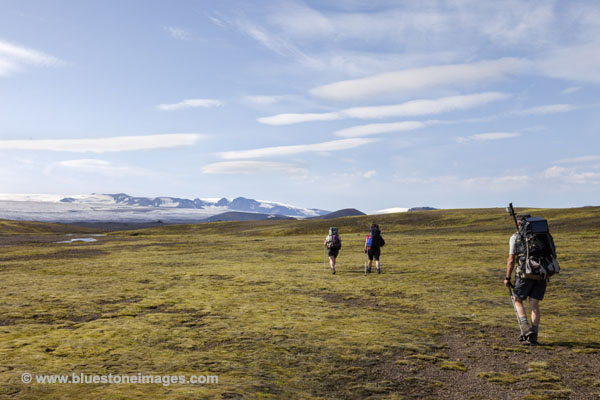 Dropping down the other side we entered the flat plain again. Ahead we could see it was dotted here and there with small green hillocks, the only sign of life in that direction for miles. 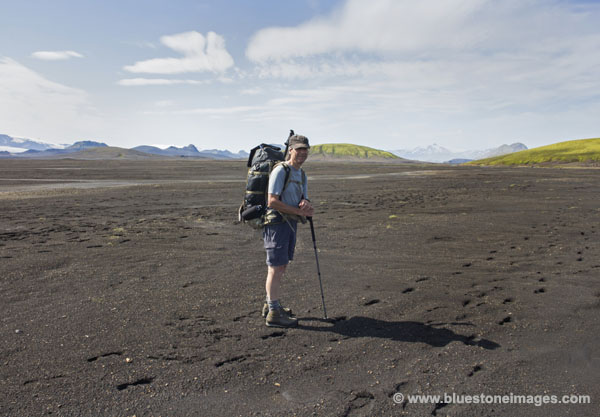 It feels pretty wild and exposed

This part of the Myrdalssandur also had lots of snow patches on its northern side and was criss-crossed with small streams. Here the ash was waterlogged and at times was more like quicksand, making it difficult to get into any kind of walking rhythm, especially so when we had to retrace our steps and find a better route. Weaving our way through this we eventually came to an area where all the streams combined to create a small river.

Expecting another freezing cold and painful crossing experience, we were pleasantly surprised to be wading through warm water and a strange mud like volcanic sludge. I can only assume as there weren't any hot springs nearby, the black volcanic landscape had absorbed the heat of the sun and had warmed the water.

Leaving the river behind we headed out over the increasing dusty and barren plain towards the mountain of Hvanngilshausar, where sometime later we spotted a small rocky outcrop with a moss lined stream running alongside it and stopped for lunch. It has to be said that while the stream was pleasant and very useful for cooling the drinks there was no shade whatsoever. On the other hand despite the heat there was nowhere better for miles so it was as good a place as any to get the backpacks off and take the weight off the feet. 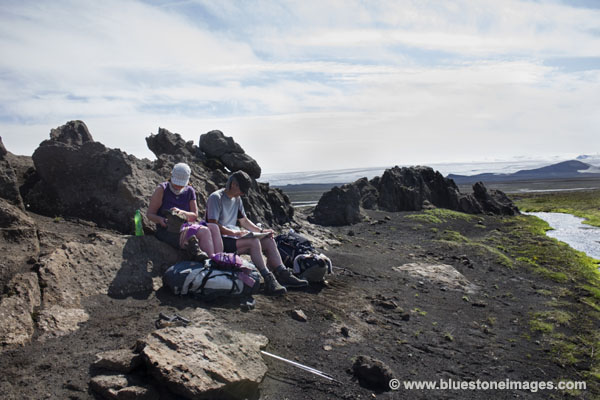 No trees for shade but fresh water

The lack of shade was more than made up for by the setting and we had good views north towards a range of mountains that in contrast to the black mountains and plains to the south of us, were full of colour and life. 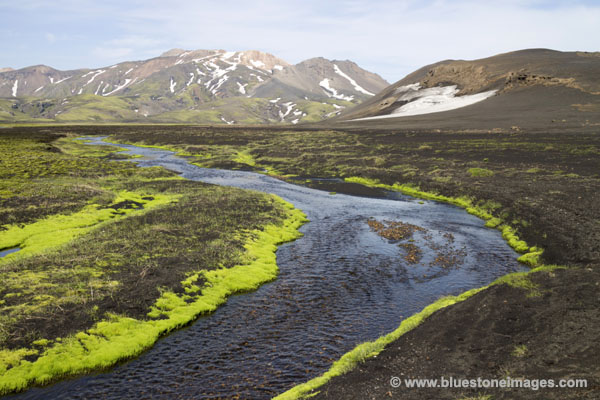 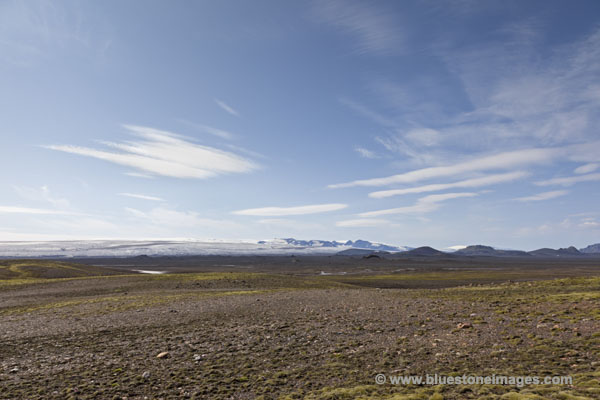 This stream also marked the edge of the dry area and it would be the last place we would be among the greenery for a few hours. The route would now take us southeast across the desert proper to try and pick up the F210 4x4 dirt road. This in turn would eventually lead us to the footbridge over the Kaldaklofskvisl River where we would join the Laugavegur trail.

We were aiming for the Kaldaklofskvisl River

It all sounds very simple and straightforward but the river was at least a couple of hours away and in between lay a moon like landscape covered in fine volcanic ash, boulders and smaller ankle breaker stones. In the afternoon heat this section turned into a bit of a slog, especially so when the dust storms finally caught up with us and we went the wrong way around a small hill. 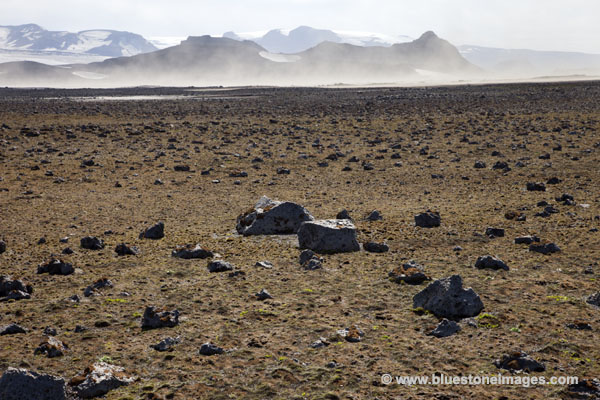 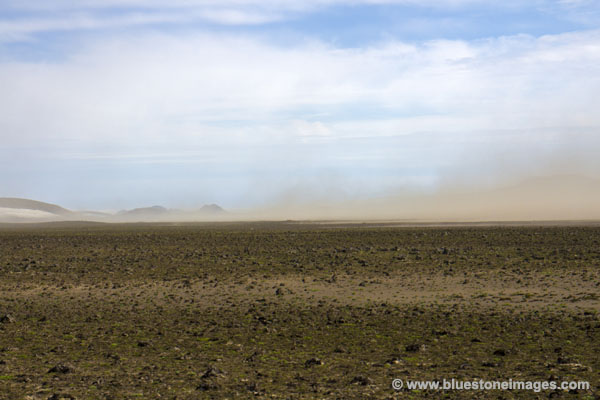 This mini deviation ended in a blind alley where a flood had scoured a jagged channel seventy-five metres wide and in places several metres deep. Footprints in the still drying mud indicated we were not the only ones to end up of course. As impressive as it was, at this stage in the day, it was a diversion we could have done without.

Eventually feeling a bit frazzled and weary we reached the 4x4 track. Here the walking was much easier and the bridge over the Kaldaklofskvisl River soon came into view. 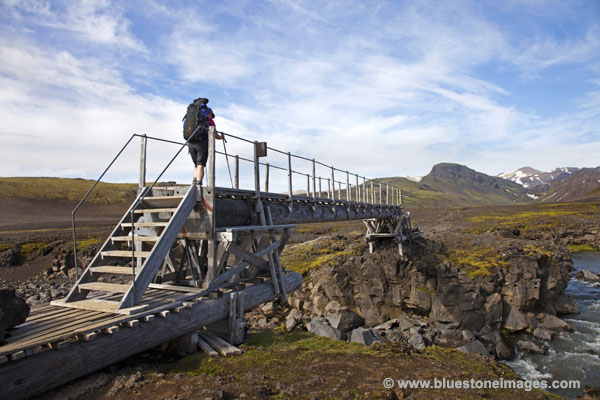 This bridge is only for pedestrians and while grabbing a much needed rest on the other side we watched a 4x4 vehicle negotiate the crossing point. I was certainly glad we did not have to wade this particular river. 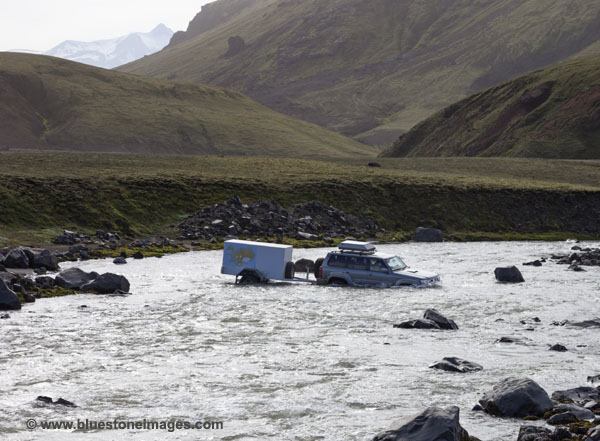 Despite having walked across the plains the days exertions were not quite over. It was tempting to camp at the Hvanngil hut a couple of kilometres away, but instead we pushed on towards the camping area next to the Alftavatn hut. It made for a longer day, but meant the next two days would be much shorter.

It was a lot further than I recalled from our previous trek and two more river crossings awaited us. Eventually we reached the lake and despite being dusty, tired and footsore it was still possible to appreciate the views. 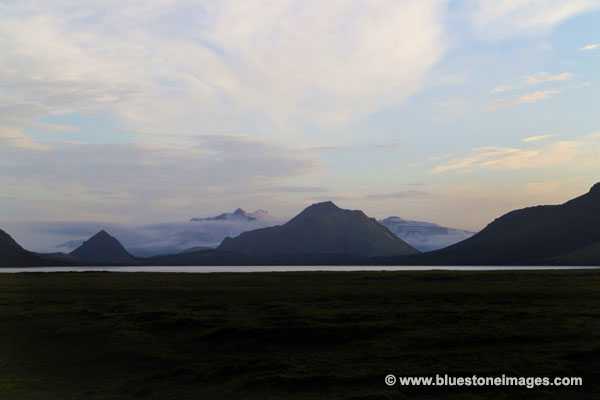 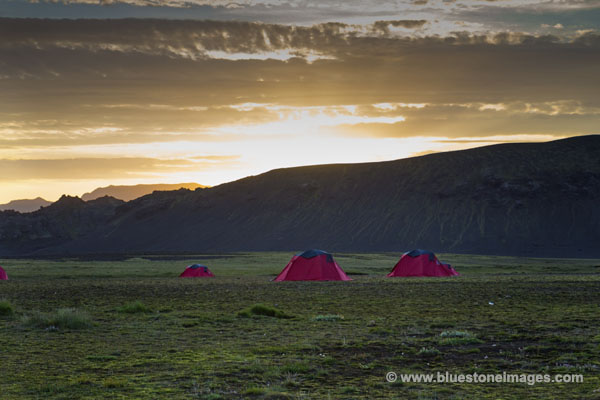 A wonderful sunset to end this part of the walk


Incidentally, I think if I was to do this route again I would certainly do as we originally planned and walk the route over three days, starting with a short 6 to 7 km afternoon walk from Holaskjol to the area near the hut at Aftavotn and then on day two camp at, or near, the Strutor hut. Day three would be similar to today. It would have given us more time to enjoy the scenery and would certainly be less tiring.

We weren't complaining though and had thoroughly enjoyed what we had done so far.