In the rain forest there is a fungi that has a life cycle straight out of a science fiction horror movie. It is called Cordyceps and once the minute spores are ingested by an invertebrate, such as an insect the fungi slowly begins to grow inside it.

This infection eventually kills the host, but then as the fungi continues to grow it bursts out of the body of the victim creating a macabre sculpture like growth from between the body segments, the antenna and even the eyes. This is the fruiting body of the fungi and it is from this that the spores will disperse to infect other unwitting victims.

What is also interesting about some types of fungi is that they also produce toxins that affect the brain of the animal causing the infected insect such as an ant for example to climb up a stem and attach itself there before dying. This elevated position is a perfect place for Cordyceps to spread its spores.

In a dark damp jungle on the other side of the world you could perhaps expect such a parasitic organism to be common, but in Britain surely not? Well believe it or not there are several species and the last few damp and humid weeks have created perfect conditions for them. While raking about in the undergrowth the other day I was fortunate to spot this infected fly. I think this fungi may be one of the Entomophthora species, possibly Entomophthora muscae. That said I am far from an expert and would welcome a more accurate ID if anyone can help. 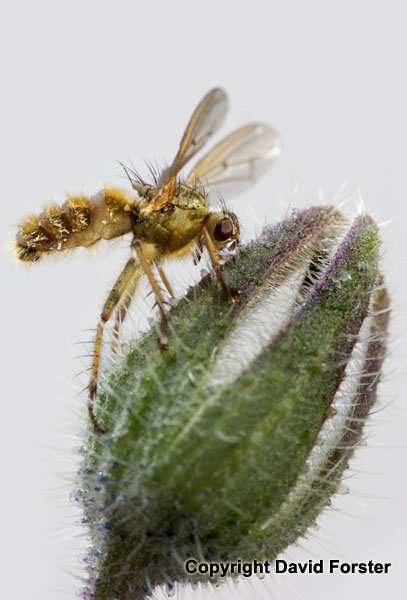 The fungi is growing between the segments of the flies abdomen, the spores of which will then infect other flies. Copyright David Forster 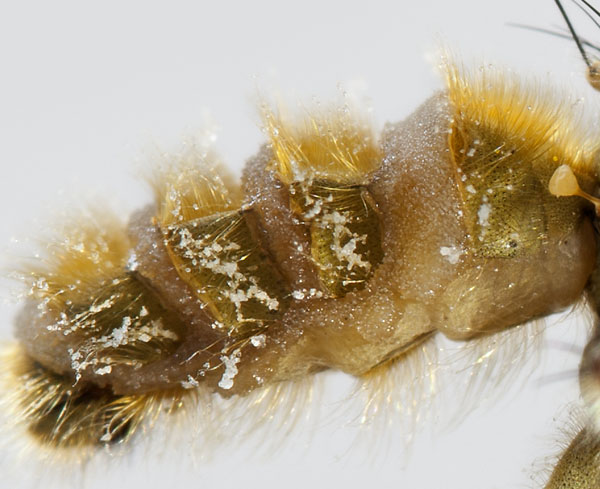 Close up of the abdomen. The growth looks a bit like the expanding foam you get from builders merchants. Copyright David Forster


Click here to see Cordyceps in action in this short BBC video, narrated by David Attenborough.


So what is the purpose of such a fungi? Well it is all about the natural balance and as many of these fungi are actually species specific, it prevents a particular species becoming too dominant. It has to be said however, that humans are not in any danger from these fungi, in fact they are used to our benefit in drugs, food supplements and as a form of biological pest control.
Next
Previous