With a stormy snow leaden sky as a roof, a cold wind sighing though its empty windows and across the lichen stained stonework, Balnakeil Church can have a desolate air. Of course ruins, especially roofless ones, do tend have an atmosphere reflected by the weather. Stand here under a blue sky and a warm sun and the church does have a much more benign feel to it. At this moment however the atmosphere was brooding and malevolent and I actually felt a little uneasy as I stepped inside. 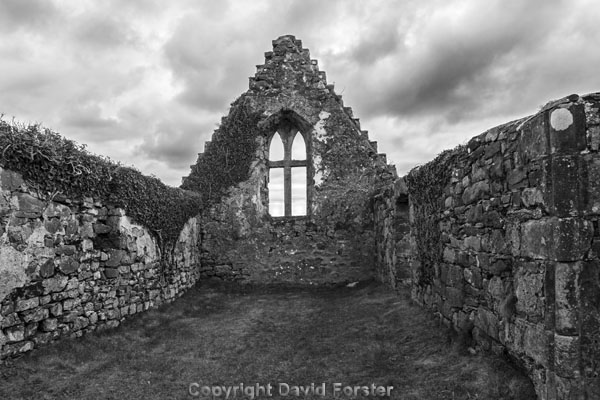 
On the left guarding the doorway is the tomb of notorious villain Domhnuall MacMhurchadh and once you are aware of his history it is easy to understand why this place of worship might have something of a malevolent air. MacMhurchadh it would appear was a cruel and heartless killer with at least eighteen murders to his name. Some say he worked alone, but very little went on without the knowledge of the local clan leaders and many sources suggest he was simply a henchman for the Clan MacKay.


Heraldic Symbols with the date 1619, the date when the church was built on the site originally founded by St Maelrubha in AD 722. This panel is above the tomb of MacMhurchadh which itself has the skull and cross bone symbol on it


Typically while he dumped the bodies of his victims down the deep shaft of Smoo Cave and denied them a decent burial, he greatly feared what would happen to his own mortal remains after death. To protect himself he used his ill-gotten gains to buy both spiritual and physical security within the church walls by lining the pockets of Uisdean Dubh MacKay the second Lord of Reay with a thousand pounds.


It is of course easy to focus solely on the barbaric activities of a single individual and there is much more to this place. In the churchyard itself there is a monument to the Gaelic poet Rob Donn Calder, Mackay. Elizabeth Parkes, an aunt of John Lennon, is also supposed to be buried here but we did not see her grave. A little to the south a slightly raised area is the unmarked grave of those who perished off Faraid Head when the emigrant ship The Canton went down in 1849 with the loss of all on board. There is without doubt a palpable sense of loss here which seeps into your being.

Such melancholic thoughts were not helped as the sky darkened bringing yet another heavy snow shower across the bay. Fortunately the siren call of waves breaking on the beach reached our ears and we were happy to be drawn away from the church to walk along the sands of Balnakeil Bay towards Faraid Head.

Any dark thoughts of death and destruction soon faded when the sun broke through and rays of light began to play on the hills to the south. Immediately the mood lightened and a friendly wave and cheery hello from a passing walker leaning hard into the wind lifted us further. Its funny how easily the mood can change with a bit of sun and a cheery word.

Heading across the sands the tide was still receding so we spent a while beach combing before heading across to some shallow caves where we had a cup of coffee and a quick bite to eat out of the wind. 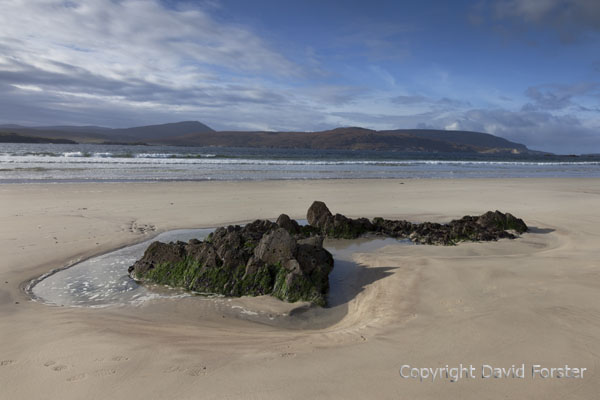 
Further on the beach merged with the cliffs at its northern end we headed up towards an old boat winch where we had good views south towards Cranstackie and across the bay to the Cape Wrath peninsular. In the sun it was hard to imagine the stormy sky and chilling snow showers of the morning had ever existed. 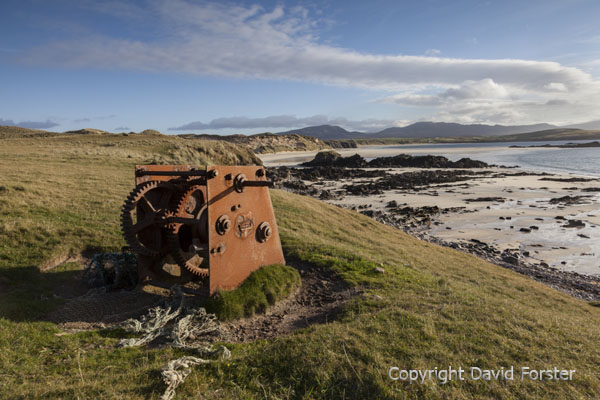 The view from the winch across Balnakeil Bay towards Cranstackie


The rusting boat winch was a reminder that people have existed on these exposed shores for millennia. In fact it was near here in the dunes that the grave of a young Viking was found by a walker in 1991, after a storm exposed part of the skeleton. Grave goods suggested a date of around 850-900. Then a few years later in 1997 a Pictish burial was also found in the nearby Sango Bay. This find took the history of the people living in this area back to pre-Christian times.

Moving on we headed up and across Faraid Head towards the military lookout post to get views of the 300 ft high northern cliffs. Unfortunately any plans we had for enjoying the view with another coffee in the sun were soon blown away by the wind. Retreating downwind towards the dunes the weather turned yet again and under an increasingly threatening sky we headed back to the campsite.


Balnakeil Church
Originally founded by St Maelrubha in AD 722 the site became an important place of worship for Celtic people. The current Church was then constructed in 1619 and altered in 1692 when an aisle was added. The church then continued in use until around 1814 before being abandoned when the new church was built.